Want to take your idea from concept to custom-written code and accelerate your development? Let our full stack python developers support you.

Stop wasting time in reading this! Let’s get started

Programming in Python is very versatile and it can be used for various purposes like web development, machine learning, scientific computing, systems administration, and a lot more. The design philosophy of Python favors code readability and its syntax allows programmers to express concepts in fewer lines of code.

Our python programmers India can work on the latest Python frameworks like Django, Flask, and Pyramid. We have a team of highly experienced offshore Python developers India who are familiar with working on enterprise-level projects. Hire Python developers USA to work closely with you to provide affordable and high-quality services.

A Few Use Cases by Our Python Developers India

Python is an interpreted language, which means it's read by a program called an interpreter instead of being compiled into machine code. This makes it easy to write, test and debug programs. The interpreter reads each line of the program and interprets or executes it immediately. This allows programmers to quickly test their code and see the results, making program development faster than other languages. 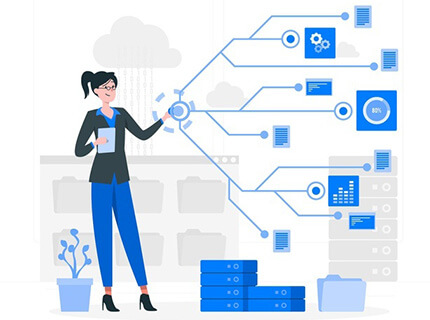 Python has become one of the most popular programming languages for machine learning, deep learning and even artificial intelligence with a wide selection of libraries, tools, and frameworks.

Our full stack python developers choose from a wide variety of high-quality libraries such as NumPy, SciPy, Pandas, Matplotlib, Scikit-Learn and many more to develop complex algorithms that simplify your data operations. This makes implementing machine learning algorithms such as deep learning, Support Vector Machines (SVM), Artificial Neural Networks (ANN) and many others quite simple.

Python is widely used in scientific computing because of its strong support for numerical computation and easy integration with other languages and programs. Python can facilitate the communication between scientific applications and backend quantum algorithms. It has a great ecosystem of numerous commercial and open-source Python IDEs that make it much easier to do numerical computing.

Our Python programmers India have experience developing scientific computing algorithms on Python with the Jupyter Notebook. We use it to combine code, rich text, and multimedia in a single document. 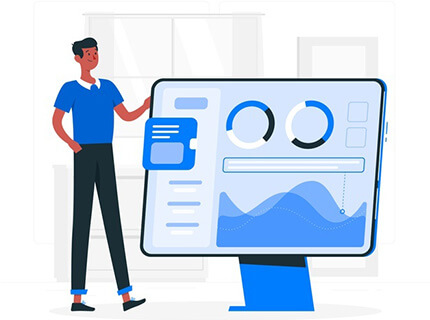 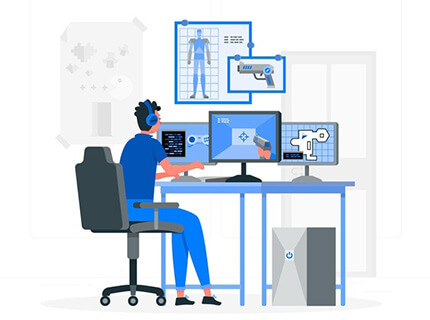 Python provides a solid infrastructure for developing games, whether 2D or 3D. It gives a lot of freedom for designing the game logic and the game engine itself.

One main advantage of using Python for game development is that it's an object-oriented language that offers flexibility with data structures. In addition, it supports integration with other languages and libraries (including C/C++), allowing you to bring more features into your games.

Have something in mind?Share your ideas

Our expertise in developing these applications has grown over the years. We have developed effective methods that help us create excellent products with great ease.

Our Python developers New York are skilled professionals having years of experience in building sophisticated custom applications using Python, Django framework and many other open source technologies. They work closely with our clients to discover their business problems and provide innovative solutions through expertly crafted software solutions.

We use the most advanced libraries and frameworks like BeeWare, TweenMax, HammerJS, and PixiJS to offer high-performance resource-efficient websites compatible with mobile phones and tablets.

Python is known to be one of the popular languages used for developing machine learning algorithms. Our offshore Python developers can create data algorithms with the best frameworks and libraries for a competent data operation.

Python includes a large standard library that includes many useful modules for networking, web services, database access, cryptography, and more. We use these to integrate with your application or integrate between various applications for maximum efficiency.

If your Python application isn’t performing up to your requirements, our team can run maintenance checks to ensure its optimal performance. We also offer 24/7 support to get any bugs fixed quickly at the last minute.

Hire our Python Developers across

What Makes Our Full Stack Python Developers Stand Out?

Our team of Python developers Texas and India has over 15 years of experience working on projects both large and small. We've used Python to create applications for clients in diverse industries, including eCommerce, education, healthcare, aerospace, finance, and a lot more. Whether you're looking to hire Python developers India to build an entire application from start to finish or need help with a specific aspect of your project, we can provide the services you need.

Have something in mind?Share your ideas

Python is a high-level programming language and its simple syntax makes it easy to learn. Python is most praised for its elegant syntax and readable code if statements and indents are used to indicate code blocks which result in code that are easy to understand.

Python's easy learning curve and rich set of libraries and modules make it popular with developers, especially those new to the language. There are numerous packages, frameworks, and libraries in place which makes it easy to develop high-quality applications quickly. And here are some of the common libraries and tools used by our Python developers USA.

Our full stack Python developers Texas and India can create custom solutions for your business application needs by integrating existing software modules with our creations. We can also help you decide where to host your project and how best to protect your source code. We help you through multiple stages of the software application development lifecycle and beyond. You can hire Python developers from our company to work on a Python project of any complexity level – from a small-scale script up to large-scale systems – that interact with multiple databases at once.

Python is one of the most popular programming languages because it can be used for a wide range of purposes. With Python, developers can build modern websites, games, software, and much more. Python can also be used for data visualization and analysis as well as automation of various tasks. The ease of use and high-level capabilities make Python a preferred choice of many.

Companies should go for the developers that have extensive knowledge of Python’s core concepts, libraries, and frameworks. Also, the developers should have a clear understanding of artificial intelligence, machine learning, and analytics.

You can hire developers of Python with extensive experience from Aegis Softtech. Our developers have expertise in using Python for a wide range of purposes.

The programmers of Python are high in demand because the language is used for a variety of reasons. Businesses can develop applications, games, software, and websites using Python.

Businesses can hire developers of Python on a permanent basis as well if required. Feel free to contact Aegis Softtech to discuss your requirements in detail so that we can help you with the best possible solutions.

Python is used by businesses of various sizes, in different industries. Starting from IT companies to entertainment firms, it is an ideal choice for many companies. Companies can also develop enterprise applications using Python.

Related article
Why does the Experience of a Python Developer Matter?

When it comes to software development, the concept of user experience (UX) refers to what happens on one side of the product. At the same time, developer experience refers to what happens on the other side. How developers feel about working with or inside a system is referred to as their "developer experience"; which is a notion in computer science. A good experience for Python developer is giving them almost everything. They need to be able to completely concentrate on doing their task in the most effective manner possible.

Demand of Python Programmers for App Development are Increasing

Since 2001, the Python Software Foundation (PSF) has served as the primary motivating factor behind the Python programming language. Python Software Foundation is accountable for overseeing the open-source programming language's license, as well as going to support the development of the Python community, which is a vast and global network that includes more than 10.1 million designers, most of whom are actively involved in the language's ongoing development.

In light of the fast developments and the increasing complexity of technology, experts believe that there would be a scarcity of Python programmers by 2022. As a company owner, you must employ an offshore python programming team that you can put your faith in and with whom you can discuss your ideas.